I posted the photo above on @natgeo last night and there was an incredible amount of back and forth.

My favorite comment was from @hellafordays: “This is a documentation of culture, which is what National Geographic does. Culture comes in every form, in every place. We don’t cherry pick Anthropology. yo.”

And, just to be clear I also understand comments like this from @2renzatho: ”On Halloween when you can be anything in the world, the female population decide(s) to degrade themselves . . . (dressing like) sluts, prostitutes. I am a woman and it is degrading.” But that comment seems aimed more at cultural mores than the messenger. 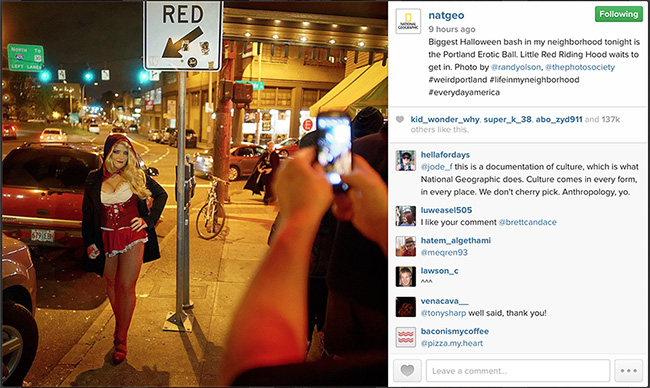 So just to summarize, the people who found it offensive were saying that National Geographic wasn’t the kind of publication that should show a street scene outside a sexy Halloween bash. And the people who did not find it offensive said that NGM covers a wide range of humanity, and what’s the difference between this photo and the amount of cleavage you might find exposed on a waitress in any hotel bar in the city? And, they continue, what about all of those half-naked African women that NGM made its name on in the ’60s and ’70s and continues to show today (my work included)? Is it just Africans far away that we can show naked without controversy? I didn’t even think much about the outfit when I took the photograph (this is a normal street scene for Portland-The only town I know with Vegan Strip Clubs). I just liked the sign that said RED pointing to RED riding hood.

I’ve held off writing about how the IG audience can affect photographers and what they do, and how it can affect their work and their psyches, but now seems like a good time to jump in.

I stopped looking at the comments on Instagram for a long time after I posted the photo below and got a response: “Can I f#ck it?” 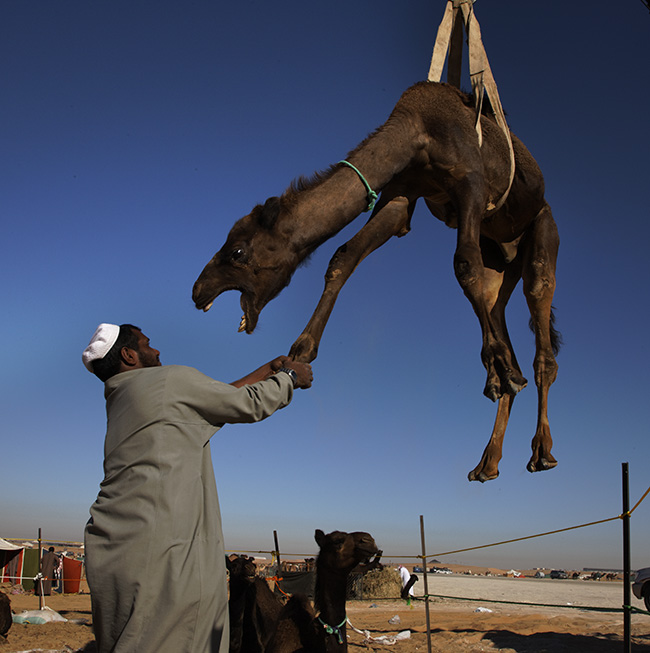 The reference was probably to an urban legend of Catherine the Great and what she did with horses. But that was when I disengaged from the audience. I just got tired of reading comments on the most innocuous of photos that, if they arrived in the mail, you might call the FBI.

Many of the comments about the post last night said this is not a National Geographic kind of photograph. So I pulled some screen grabs from the website. The first is my photo of a woman trying to figure out how to use the first bra that came into her village in the Omo Valley. This photo ran in the print version of NGM but would be too “offensive” for Instagram. As my buddy and social media manager, Alex, says: “There are no boobies on Instagram. They will shut you down.”  He also tells me what I am writing today is relevant because Chelsea Handler (a comedian) posted a topless photo of herself riding a horse last week to tell Instagram that its nipple policy is sexist. 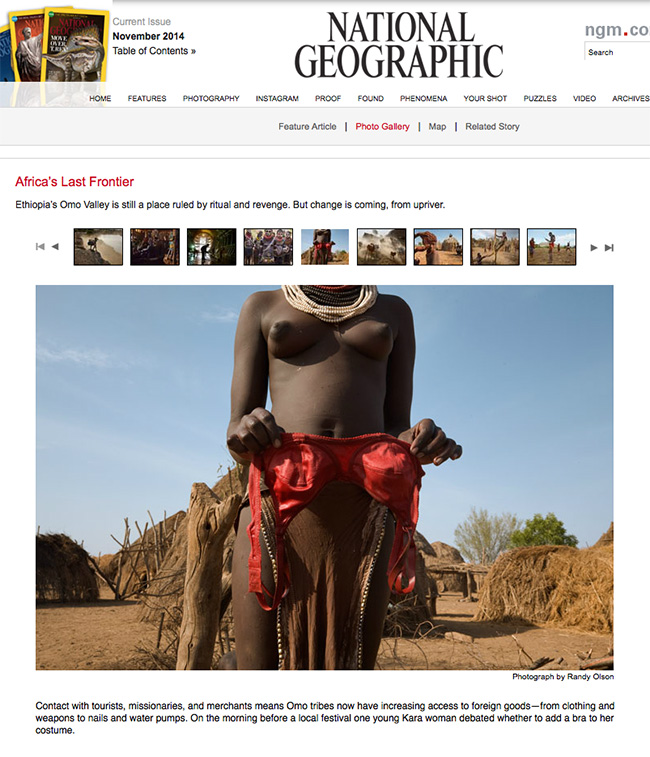 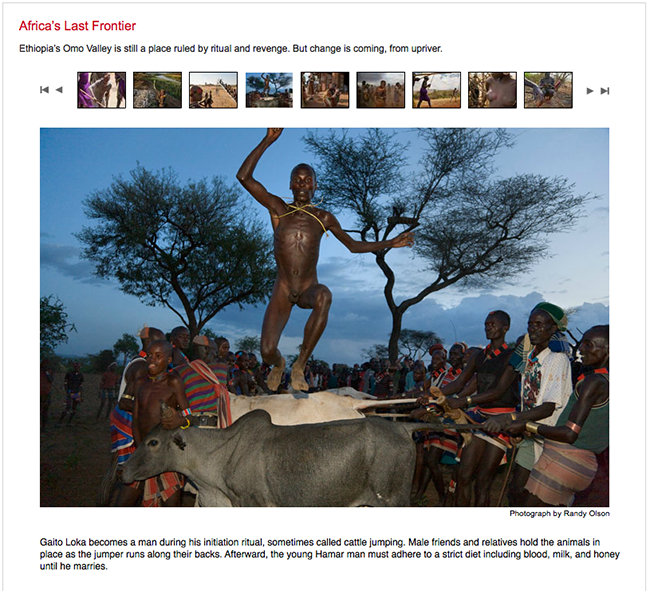 And just so you don’t stereotype me, at the beginning of my career at NGM I was proud to get naked white guys into the magazine to make up for all those half-naked African women (below). But then I started working in Africa and you just can’t ignore half of the population. 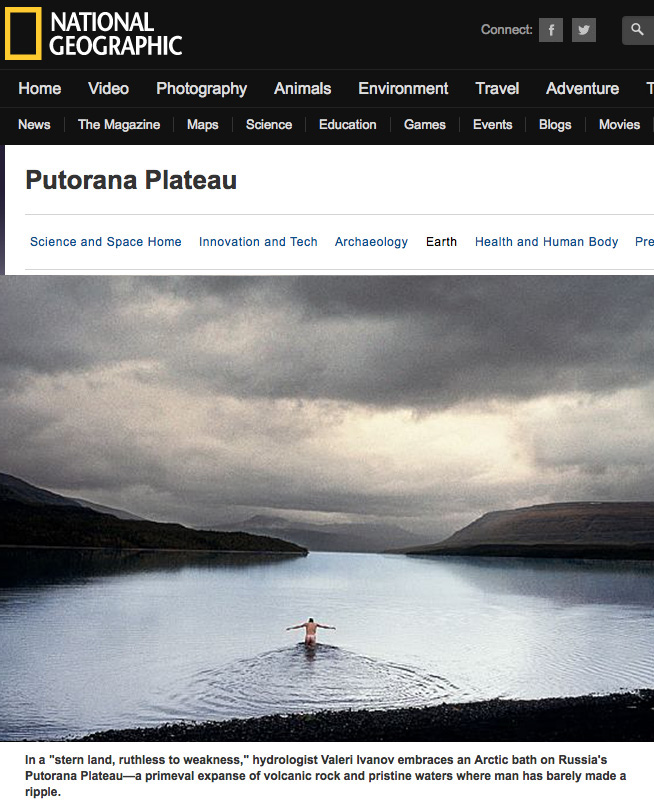 And of course NG doesn’t run only titillating photographs of African women. I don’t know if the IG audience knows NGM did a (tasteful-kinda-historic) swimsuit edition. The current director of photography did the main piece and then the hook that made it NG was that they ran photos of swimsuits going back 100 years or so from the archives. I clipped the photo below from an Amazon page that you can click to buy it and see how they did it if you are interested. 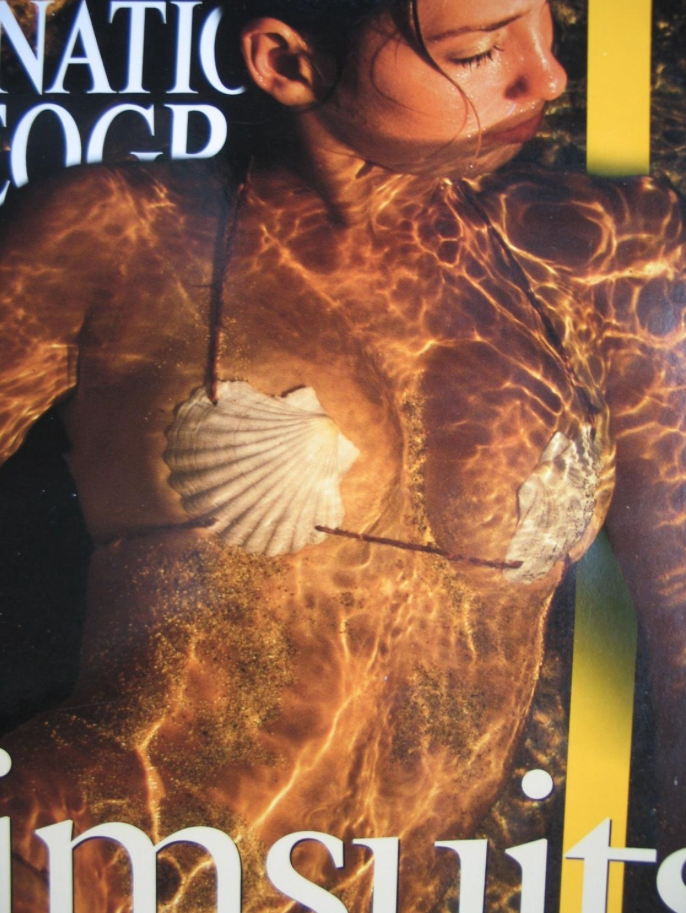 NGM has covered a large range of issues that revolve around sex. From us sharing 98% of our DNA with Bonobos that want to make love all the time, the sex worker trade, Tokyo Lolitas, lust, romantic attachment, science of love, arranged marriages, bride shopping, child brides, and many other related issues.

Gerd Ludwig couldn’t do a story about “Moscow Never Sleeps” without photographing how prostitution is a part of that night life. Prostitution and the export of prostitution skyrocketed after the fall of the Soviet Union. I photographed prostitutes coming into Trabzon from Ukraine in such numbers that it was a real issue in that Islamic country and NGM ran one of those photographs of a prostitute in my story on the changing culture of the Black Sea. Chris Johns (now in charge of editorial in print and electronic media) as a staff photographer photographed prostitutes in Nevada because he couldn’t ignore Nevada’s recent legalization of the trade. To say the publication of these photographs condones prostitution is ludicrous. And, to be fair, there aren’t many of those photographs in the magazine. But I think the idea that we photograph a full range of human experience resonates with every photographer I know. 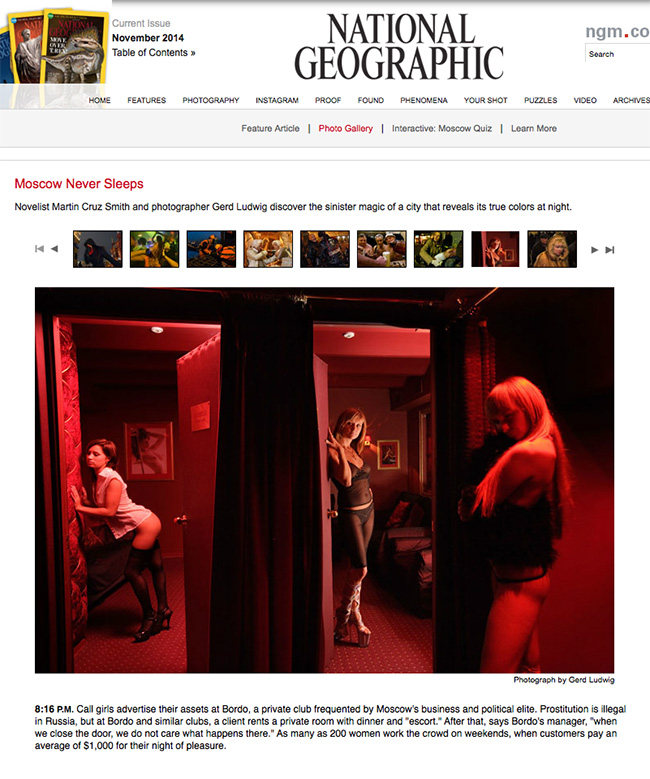 We live in a complex world and I am constantly intrigued by the Thoreau quote: “Most men lead lives of quiet desperation and go to the grave with the song still in them.”  My favorite vignette about this is when I was working in Australia and read a story in the Sidney paper about the economics of legalized prostitution. The brothels have to report their income flow and the ups and downs of that income flow were correlated by the newspaper reporter. What he found was the income skyrocketed whenever there was a big religious convention. So, once again, that line resonates. “Lives of quiet desperation…”  Who knows, maybe some of that is going on with the folks that were so vehemently against the Red Riding Hood outfit.

In general, I have one overarching concern about photographers paying too much attention to an Instagram audience. I’ve spent my life photographing for smart editors with a sophisticated aesthetic. I’ve really tried to please them and myself with my photographs. And even so, as those comments rolled in last night, about what I see as an average street scene, I found myself questioning whether I should have posted.

When I worked for a newspaper I had no sense of the people who put 25 cents into that newspaper box. Now the content is free but everyone has a right to give you their two cents back. It would be nice to be able to monetize that for worthy causes.

I see this play out every day on IG. Marcus Bleasdale is a great photographer who has single handedly changed the conversation about conflict minerals. His book of complex photographs of resource extraction in the Congo is one of my prized possessions. But when he posts one of those photographs from the Congo—the kind of complex image that many of us have worked hard all our lives to have the skills to create—he will get lower numbers than this sunset and probably some racist comments. But when he posts this pretty sunset, 281,000 people immediately like it and there is no controversy.

So… why not just do that? Be loved by an audience, have a huge following… what’s the downside? 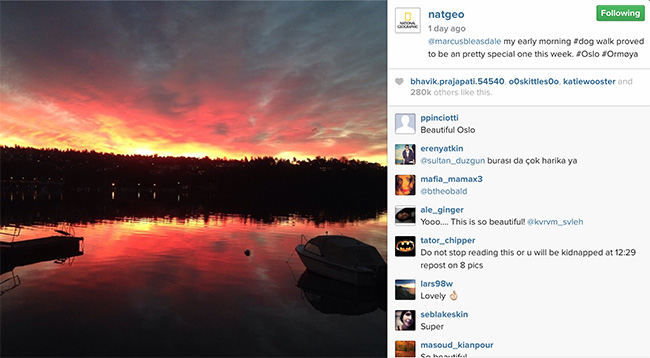 I also got the feeling people thought the editors in Washington were choosing the photographs to post. What not many realize is this feed is solely fed by the photographers without any editing and more often than not they are doing it for free.

We want to be part of a global conversation. We want to talk to you through our photographs. But it’s easier when everyone plays nice. I don’t know a single photographer on our side of the conversation that has ever been mean to anyone in @natgeo‘s audience or @thephotosociety or in their own individual feeds.

I love to hear thoughtful comments that promote interesting discussion but I’m not sure “Can I fu@k it” really adds to the conversation. 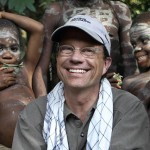 The Creature in the Wall….Video BTS