Michael Oryem, a recently defected member of the Lord’s Resistance Army, with 2 of 6 ivory tusks that he hid and then led the Ugandan forces to inside the border region of the Central African Republic.  Oryem was abducted by the group when he was 9 and lived with them for over 17 years in the wild. He was made a commander in the group at the age of 12. The LRA is infamous for the killing and abduction of thousands of civilians across multiple countries. He defected and is now a member of the Ugandan Army hunting the LRA. Photo by Brent Stirton/Reportage for Getty

On 15 January at the conclusion of National Geographic’s annual photography seminar, George Steinmetz made the following address:

The greatest pleasure I get from being head of the Photographer’s Advisory Board is to give out the annual National Geographic Photographer’s Photographer Award. There is no greater honor than to be recognized by ones peers, especially with a crowd as accomplished as this. The award is for the photographer who has most inspired us by expanding the possibilities of our medium. This definition is purposely vague, as what inspires is always the unexpected.

In this room today, I think it’s fair to say, is the largest assembly of great photographic talent in the world. Take a look around… it’s pretty impressive. So I know what you’re thinking… George gives this thing out every year, and a lot of people have had their turn… Maybe, just maybe, this year it’s me?

Well, the mathematical probability of that continues to get smaller. Over the past few years there have been about a dozen new photographers publishing features stories in NGM every year. But this year there were a whopping 17 photographers who had their first feature story in NGM and the number of photographers in the The Photo Society has grown from about 80 to over 161.

This year’s winner is a photographer who tends to spend most of his professional life in far away places, taking on some of the toughest assignments. In fact the story that he won for was originally given to another photographer who worked on if for over a year before determining that it was impossible to shoot.

The subjects that our winner chooses generally don’t want to be photographed, so he has to mount a quiet charm offensive and win them over with politeness and persistence. In pursuit of a picture, this photographer often has to travel deep into lawless territory where his survival is totally dependent on gut instinct and relationship he builds with strangers he has little in common with. In such circumstances, his only protection is an easy-going charm and keen instincts on how to deal with situations both unsavory and unexpected. To get information and access to various photographic situations he has posed as a smuggler, hunter, soldier and priest.

This kind of bush-smarts is reminiscent of a joke that an old expat told me in South Sudan… What do you call a drunk African with a gun? … “SIR!”.

You don’t hang out in these kinds of situations unless you are really determined to bring the world’s horrors, in the form of its victims and evil-doers, home for us to consider in our living rooms. It also helps if you are doggedly determined and work your butt off. Everyone I spoke to about him described him variously as an ox, a photographic machine, and someone who works 375 days a year, but at the same time, they all said he was one of gentlest people they knew.

One writer who had done fieldwork with this photographer told of a time when they were working deep in the African bush. As the writer came off the trail and arrived back at the LandCruiser, he heard that there were huge riots going on back in the nearest town. There was shooting and a man had been killed.

This year’s winner had gone ahead of the writer, and was already down the mountain, which meant he was in the middle of the riot. And so in a panic, the writer grabbed his mobile and called to warn him.

When he finally got through this photographer calmly replied: “You should wait a few hours, bro”.

“No, No… I’m calling about you!” the writer responded.

To which our winner replied: “Oh, I’m just going to have some lunch here and take a few snaps,” he said.

Perhaps it’s because he’s so cool and modest that most people don’t know that this photographer also took the best-selling set of pictures in the history of photography. No, it wasn’t the Earthrise over the surface of the moon, or an instagramed panda or polar bear, but Brad Pitt and Angelina Jolie cooing over their newborn twins. And he did this shoot for free, with the 34 million dollars paid for publishing rights going to a charitable foundation. I’m not sure how much it’s humility or embarrassment, but to this day both this photographer and his agency refuse to admit that he ever took those pictures.

This photographer grew up wanting to be a doctor and served as a medic in the army before turning to journalism. While still a student, he began writing for a local newspaper. Unable to find a photographer to accompany him on dangerous assignments, he bought a used camera to take his own, and soon found that photography was instantly more gratifying than writing. I think we can all relate to that!

At the age of 23 he started shooting magazine features in the most violent parts of Africa, and soon was working for all of the top magazines in the world as a conflict photographer.

His career took a dramatic turn in 2007 while working as a stringer for Newsweek in the Congo. He heard that some gorillas had been killed in the nearby mountains. He photographed a recently killed 600 lb. silverback gorilla being carried out of the bush by native conservationists on a makeshift wooden liter. That photo ignited international outrage, and made him realize the power that photography can have in the desperate struggle to conserve endangered wildlife. That picture won numerous international awards, and led to his first feature story on the Virunga gorillas for National Geographic. He has now done 9 stories for the magazine and won World Press Photo awards 8 times.

That experience in Virunga turned him into the consummate conservation photographer. And by that I don’t mean someone who shoots pretty landscapes. No this guy is the real deal. He’s someone who goes all-out to show the ragged edge between man and nature, on the battle lines where habitat is lost or preserved.

Last weekend I spoke with his long-time picture agent, who shares the same birthday as our winner, and he described a nocturnal birthday party on a rooftop in Manhattan. With a little prodding and some help from Jack Daniels, they got our normally soft-spoken winner to recount what it’s like being charged by a mountain gorilla. This photographer did such a magnificent job of imitating the territorial threat of a large silverback that a number of guests fled to the very edge of the roof.

So without any more futile attempts at veiled description, I would like to announce that the sixth annual National Geographic Photographer’s Photographer Award goes to our very own gentle giant, Brent Stirton!

Unfortunately Brent couldn’t be with us today, as he’s in India working on a deadline to finish a story about a giving sight to the blind. After the votes were counted last week, I had two editors contact him to try and change his travel plans. But there was no way. This is quite in character for Brent, who typically spends 9 months a year doing fieldwork for various publications and NGOs. In eight years he’s only been to one seminar, and usually skips award ceremonies. He is the consummate photographer’s photographer, and knows that our finest moment is found while chasing the light in a pair muddy shoes. 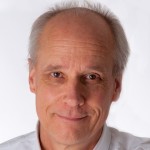