In October 2016, it was my honor to win the “Wildlife Photographer of the Year” award with an image of an orangutan climbing a tree in Gunung Palung National Park entitled “Entwined Lives”. It’s been a few months now since the award, and I thought I would like to share the story behind this image and what this image means to me.

As a wildlife photographer, it was of course a career highlight to win this award – the most prestigious in our field. But for me, it was particularly special because I made the image in Gunung Palung National Park (GP) in Indonesian Borneo. GP is a place that I have had a personal relationship with for nearly thirty years, since I first went there as a research assistant in 1987, and I care deeply about its conservation. Not only did I do my Ph.D. research at GP, but I also photographed my first National Geographic articles there. Not only that, but I am married to orangutan researcher Cheryl Knott, I have been going to GP with Cheryl (and more recently our kids) nearly every year to help with her ongoing orangutan research and conservation program (see www.saveGPorangutans.org). This picture is one of six photos of mine on the theme of orangutan conservation that won first prize in the Wildlife Photojournalism Story category of the competition. All six are now part of the traveling exhibition of the top 100 images that goes to sixty venues around the world. Thus, I am hoping that the exposure from winning this contest and the travelling exhibition will bring some positive attention worldwide to Gunung Palung and the plight of orangutans.

This image has a very unique perspective. In fact, people say they have never seen an orangutan picture like this ever before. So I thought I would take the chance to share what went into making this shot. I have actually had the idea of trying to photograph an orangutan up in the canopy with a wide lens for a long time. Gunung Palung has one of the very best remaining areas of lowland rainforest in Borneo, and intact primary forest is so important for orangutans. I wanted to capture a photograph that really showed the orangutan in the forest it depends on, and convey that feeling of the connection between them.

But getting a camera into position to get this shot was a challenge! This is a wild orangutan and would never tolerate me up in a tree near him. So the only way to get a photo like this is to use a hidden remote camera. The problem is, orangutans are not that predictable and travel through hundreds of different trees in the forest every week. So as I followed orangutans from the ground with Cheryl and her team, I was always looking for the right situation to try this. The only thing somewhat predictable about orangutan ranging is that if there is a tree with a lot of fruit in it, they may visit it several times over multiple days. My hope for getting a shot like this was to find such a tree and then climb and set up remote cameras when the orangutan had left, and hope he or she would come back. Luckily, I had developed the skills to do this as part of my PhD fieldwork in Gunung Palung between 1990-1992 on strangler fig trees, when I did a lot of tree climbing for my research. It was then that I perfected my techniques for rigging ropes in trees and climbing them with rope-ascending equipment, and these skills have been part of my “tools of the trade” as a rain forest wildlife photographer ever since. In fact, soon after I started doing serious wildlife photography from up in trees in the 1990’s I had the idea of photographing a wild orangutan close-up with a wide lens and even carried out some failed early attempts in 1994. So my recent efforts are the result of dreaming about such a shot and mentally planning it for 20+ years.

In 2014, when I arrived at Gunung Palung, one of Cheryl’s students, Robert Rodriguez Suro, had found a good fruiting Chaetocarpus tree that orangutans were repeatedly visiting. I climbed it with ropes and mounted two DSLR’s cameras, hidden in camouflage, and then we had a long stake-out. Every day for about a week, I would climb the tree early in the morning and put out the cameras with fresh cards and batteries. Then photographer Trevor Frost, who was assisting me at the time, waited under that tree for orangutans to show up while I was following and photographing other orangutans elsewhere in the forest. I think Trevor read a lot of books that week while he waited! We had a number of opportunities when orangutans showed up, and Trevor fired the cameras with a radio control. But things didn’t go perfectly. We had range problems with our signals reaching up into the dense canopy so the cameras wouldn’t always fire. And the orangutans seemed to spot the cameras and take circuitous routes into the tree and avoid passing near the camera. Every night, I would climb the tree again and recover the cameras, and see if we had anything on the cards.

All that effort produced one shot that was “almost” there, of a female orangutan named Jumi passing pretty close to the camera one day. The shot (see below) really had that feel I wanted of being up in the canopy with the orangutan, but unfortunately, her face wasn’t visible, and the orangutan was not quite close enough, so it just didn’t quite work. I knew, however, that the concept was viable after this experience, and was determined to keep trying. I just needed the perfect tree, and cameras that were better hidden. 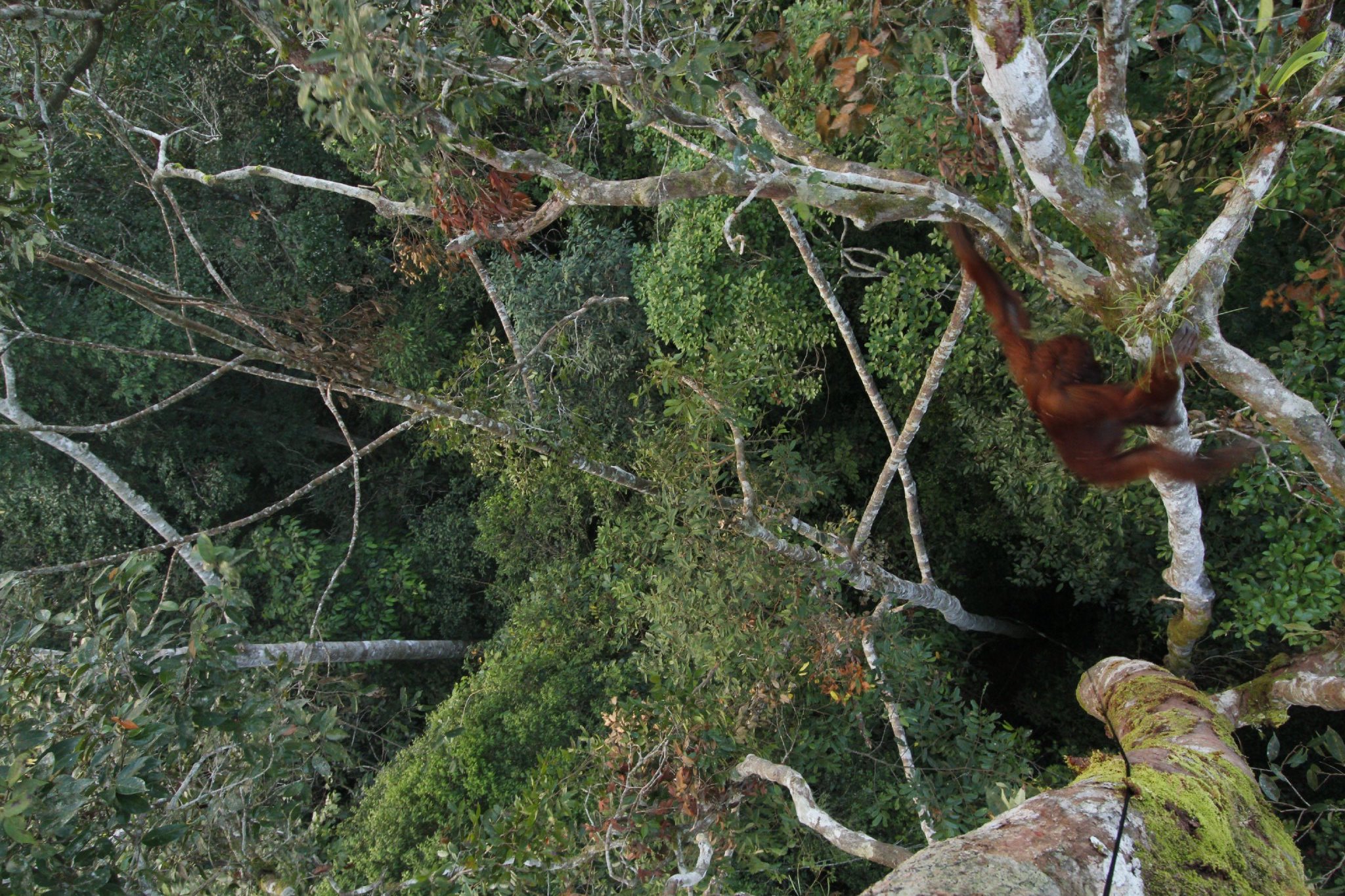 In 2015, we were back in Gunung Palung, and this time, the orangutan, Walimah, led me to an even better tree, the one where I finally got the shot I had dreamed of. It was an Artocarpus tree with a strangler fig (Ficus stupenda) growing on it. The fig tree had a large crop of ripe fruit that had attracted Walimah. She was soon followed by a young male named Ned, so there were two of them in the tree feeding. This tree was unique, because its crown was not touching any other neighboring trees, so the only way an orangutan could get to the fruit was to cross over from a small tree to the lower trunk of the tree, and then climb up the fig roots into the canopy. Perfect. When I saw the orangutan do this, I knew this was the best chance yet to get my shot. When the orangutans left after that first feeding session, I rigged a rope and climbed the tree and prepared camera positions. This time, I decided to use small GoPro cameras that were easier to hide, and could be controlled by wifi from the ground. For the next three days, I climbed the tree several times a day. Putting cameras out pre-dawn, and recovering them later. Walimah and Ned both visited each of those days, so I had a few chances to get the shot I wanted.

To get the prize-winning still image that appears here, I used the time-lapse mode on the GoPro, shooting two frames per second when the orangutan arrived and started climbing up the tree capturing a series of images as the orangutan approached and passed the camera position. Many of them were blurred, and on some visits, the orangutans climbed around the back of the trunk out of sight of the camera. But one of the frames, just as the young male Ned passed near the camera, captured the perfect moment of an orangutan in his element.

I like the title “Entwined Lives” for this image, and I have Roz Kidman Cox to thank for that as she came up with it. For me, it captures my goal to show the connection and interdependence of species in the rain forest. The fig tree depends on its host tree for support – the orangutan depends on the fig tree for food – and by analogy of course, they depend on the entire forest ecosystem. I do believe that photographs can have an impact on people’s appreciation of and understanding of nature, and I hope people will realize before it is too late, how much our human lives are “entwined” with nature on this planet.

[ To learn more about orangutan conservation and research at Gunung Palung and what you can do to help, check out Cheryl Knott’s website at www.saveGPorangutans.org] 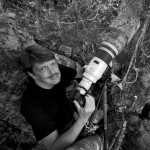 This Lens Does All That 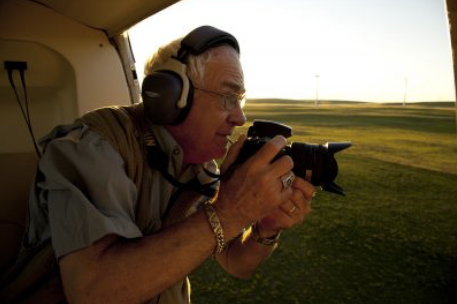 WRITING YOUR WAY INTO NATIONAL GEOGRAPHIC OR ANYWHERE ELSE