It is with great pleasure that I recall the career of our honored colleague , Chris Johns. A task somewhere between a Roman Triumph, and a celebrity roast, intended to skewer the defenseless victim, and make them squirm a bit.
And like Ceasar’s assassins I have not come alone, but bring with me a few co-conspirators.
Let us begin over 50 years ago. Dennis Dimick first met Chris in 1968 in Oregon. Both were high school seniors, both were in the Future Farmers of America.  “Always ambitious,” Dennis observed,  “Chris soon won the state FFA public speaking contest and was elected state FFA president.”
“In 1971 we became college roommates at Oregon State University both studying agriculture. By then I had taken up photography for the student newspaper. My interest in photography changed both our lives. Chris was intrigued by my Nikon camera, and soon bought his own. We changed our study focus to photojournalism. The rest is history.”
I first met Chris in 1976 when he joined Rich Clarkson’s Topeka Capital-Journal photo staff, an ambitious bunch, rowdy, and eager. Chris fit right in.
Chris sometimes joined me in Cuba, Kansas where I was the tuba player in the city band — besides doing documentary photography. Chris claimed he was an excellent trombone player. He was awful. And more beer didn’t help.
Chris was driven but also corruptible. One Friday Chris and I simply disappeared, turned off our two-way radios, spent the afternoon drinking beer in the Mill Creek Tavern, a Flint Hills watering hole. Next day I got reamed out for corrupting the lad. But Chris grinned with a twinkle in his eye and skated by.  It has always been thus.
A couple of years later Chris was working on his POY entry. He still needed a portrait personality picture. For three days Chris didn’t show up for work, disappeared, drove off into the Flint Hills. But he came back with the portrait, a grizzled old rancher —  and he won Photographer of the Year.
Cars were a common thread in memories of Chris.  He bought a big black Saab —without air-conditioning —  in sweltering Kansas.
Sarah Leen said “Chris loves fast cars. When I first met Chris as a new photographer at the Topeka Capital Journal, he showed me a gorgeous pristine Porsche 911 living in his garage. I never once saw him drive it.”
“Later when he became Editor at National Geographic he upped his game and had a rapidly changing series of Ferraris and Lamborghinis. But I don’t think any of them lasted more than a few months, there was always another one that was more beautiful.”
“Chris was — and is — a Bigger, Better, Faster, More, kind of guy. Driven.”
Sarah saw that driven side again years later when Chris was editor of National Geographic and Sarah the director of photography, Chris haunted the offices after hours:  “In the evenings, he would wander the halls dropping in on late working photo editors for a chat, to discuss an idea he was kicking around, or tear up an issue, in his constant drive for excellence.”
Bill Marr saw it, too:  “Chris was like a dog with a bone. Many editors found a morning email with a “humble” suggestion for improvements to a story that most everybody thought was done and gone weeks before. Issues were never done until they landed on your grandmother’s coffee table.”
All subjects great and small got the Chris Johns treatment. Kathy Moran recalled her first natural history story with Chris:  Squirrels!
Declan Moore recalled “his childlike excitement on just receiving the remote camera video of the bear bathing in Yellowstone.  So many times, at the end of a long day Chris’ announced that he had just received some killer pictures and all the noise we dealt with was suddenly rendered meaningless.”
“His persistence is legendary,” said Declan.  “He once told me that you don’t get to do much work in Africa if you pay heed to the word “no.”   Declan remembered coming back from Tim Kelly’s office with a stern directive:  “More Paris, less Parasites.” That didn’t stop Chris. “He has a superpower skill of genuinely agreeing with you but with a glint in his eye that you know he’s going to do what he’s going to do, anyway.”
“This man can romance a roomful of Rolex executives as easily as he can wrangle a Nikon D5,” Declan remembered. “In business meetings Chris had the finest suit, the shiniest shoes with laces perfectly tied. I mean, equal length laces — both sides. Who does that?!”  Declan asked.
The answer: Chris Johns. 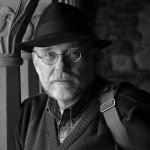 WORKSHOP: THE ART OF STORYTELLING